This is the last in a three-part series about long-dormant downtown McComb buildings that have been purchased and the plans to resurrect them.

The Palace Theater was a bright spot in downtown McComb during the first part of the 20th Century, bringing entertainment and lifelong memories to locals, but the building has long sat empty and in decay at the corner of Front and Main streets.

Now, a six-man group is ready to bring the building back to life so patrons can make new memories.

“That’s the thing about the Palace — a lot of people in the community are connected to this place, whether it was their first date or a beloved childhood memory,” said Jamey Hewitt, one of the new owners. “I remember my grandfather talking about coming to town to see a Saturday matinee, and he was talking about coming here.”

Hewitt, Val Deer, José Simo, Jeromy Spiers, Jeffrey Stewart and Jason Van purchased the former Solomon movie theater in late August and plan to renovate the vacant structure into a “multi-use venue” for live music and other events such as ceremonies, receptions and recitals.

The building was built as a small store in 1889, and brothers Hallem and Najeeb Solomon purchased it in 1924. They soon knocked out the back wall and continued construction down the hill, south along Front Street, turning the tiny shop into a grand movie theater.

The theater continued to operate into the 1970s, and since it closed, various owners have tried to bring new ideas that never came to fruition.

“It’s going to take a lot of support to make it happen,” Van said. “We have a good plan and the drive to do it, but it’s a big project.”

The goal is to complete the renovations in about two years and be ready to reopen the doors in 2016. While the six new owners are prepared for the hard work ahead to make their vision a reality, funding may be more difficult to find.

“We are all business owners. We all have the want and the passion but not the deep pockets,” 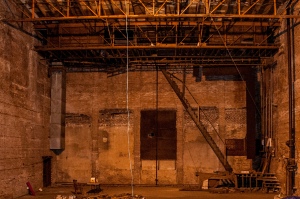 Van said. “We don’t want to borrow a bunch of money to fix this and it not work out. We’re trying to do this as we can.”

The owners are avoiding taking out massive bank loans, and Hewitt said some residents who support the project have asked about making monetary or supply-oriented donations. He hopes the community support will continue as the project unfolds and more people will step forward to help restore a piece of McComb history and revitalize downtown.

The theater’s iconic marquee was scrapped after the building stood vacant for years, but the new owners plan to bring back a replacement. The group found the original glass doors and plans to install them to their rightful place on the front of the building.

Since the purchase, the group hired a structural engineer to examine the building. The engineer found a few minor problems in the walls that are fixable — and expected — in a century-old building. The roof, however, had to be replaced, and the six new owners took care of that step first.

The theater is mostly empty from wall to wall, but a few artifacts from decades past remain. A vintage candy machine waits right inside the doors not far from a 1950s-era soda fountain. Hewitt said the owners plan to keep the candy machine, but they could be willing to let the soda fountain go to a good home.

Though the new owners have a daunting task ahead with a major renovation project and little funding, they are prepared for the steps to make it a reality.

“We’ve been cautious to let the cat out of the bag yet because we didn’t know if this was going to be possible,” Hewitt said. “We didn’t want to get the buzz up about the building and then it take two years to do and lose that energy. Now, people have seen us doing this.

“We have the roof on, we know we’re doing this, and we’re going ahead. What we come across now, we’re just going to climb it.”