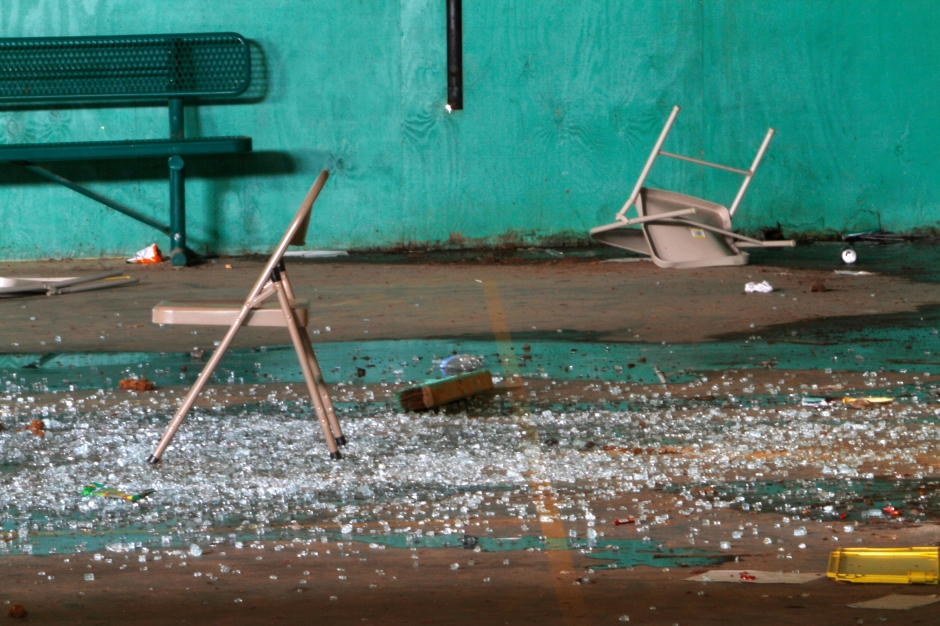 Carrie Wells, 63, has lived at the same lot on Martin Luther King Drive since she was 13.

Friends and family often congregate on her front porch and enjoy leisurely afternoons in the fresh air and sunshine, but a large teal building is what they see when they gaze across the road — a dilapidated gymnasium no one has entered in at least five years.

The Martin Luther King Complex consists of a seldom-used community center, a condemned gym, two tennis courts and a splash pad. The splash pad is the most used of the four facilities, followed by the tennis courts. The property is owned by the City of McComb and managed by the Recreation Department.

industrial-grade kitchen that’s never been used for cooking, and additional bathrooms, is closed to the public except for rentals.

Former Mayor Tom Walman’s plan was to make the complex “first class,” but less than 10 years later, it couldn’t be further from his hopes.

The gym, which was rebuilt in 1978 after the original was destroyed during the devastating tornado in January 1975 that tore through Pike County and surrounding areas, has been condemned since 2009 and is an eyesore to the community and the city.

No one, including city officials, is allowed inside.

The site looks more like a shelter in a post-apocalyptic world than a place where children used to play. Three of the four windows on the entrances are busted and the ground is covered in bottle tops, glass shards and general rubbish.

The basketball court, once used for summer leagues and talent shows, is now strewn with broken glass and water. A basketball hoop dangles from the ceiling, reminiscent of the days when players hung from the rims after a jaw-dropping slam dunk. Folding chairs are bent and overturned. Trash and clothing are scattered across the entry ways.

The exterior walls are tagged with graffiti, and massive holes in the cinderblocks are visible from quite a distance.

Inside and out, the gym has fallen into deplorable condition, and Burglund residents only have one question — why?

“They’ve condemned something that needed to be,” Wells said. “That (gym) needed to be. It’s not a should be, it’s a need to be.”

To say that the complex has a complicated history is an understatement. City board members have battled for decades over the allocation of funds for repairs to the gym.

Discussions for the additional 3 percent tax on hotel rooms in McComb began in 1996, but the measure was struck down for years at the local and state levels. Nine years later, Gov. Haley Barbour signed the McComb hotel tax bill, but by that point, the language to use those funds for the gym had been removed.

In 1997, Walker’s Chapel Free Will Baptist Church asked the board if they could use the building. Soon after, Quordiniah Lockley, the current city administrator and a Walker’s Chapel member, was appointed project director for a smaller scale renovation than the gym needed.

The city donated $10,000 to the $11,300 project, and volunteers from Walker’s Chapel raised the remaining monies through fundraisers, including raffling an autographed Scottie Pippen jersey.

And while Walker’s Chapel and Lockley did what was possible with the money they had at the time, it could only go so far.

“They ran tournaments out of there, but it didn’t erase the fact that the building was out of code and it was just substandard,” said Warren Ellis Gilmore, a former McComb selectman who represented Ward 5, where the gym is located.

A $9.5 million bond issue was approved in July 2008 but was rescinded barely a month later. It would have given $269,200 to the gym for roof repairs plus other structural and cosmetic issues. Without the bond issue the renovations never came, and the gym was condemned the following year.

Despite the gym being closed for half a decade of its 35-year existence, Burglund residents still hope the center and the gym will once again be open for public use.

A few years ago, the Recreation Department had a full-time staff member at the center to bring in programs and activities, but due to budget cuts, that option is not financially feasible right now, says director Joseph Parker. The department oversees 11 parks but only has 10 employees.

Many community members believe the gym is not only a place for recreation and entertainment, but also a place for neighborhood children to go instead of aimlessly wandering the area.

Jaton Isaac remembers looking forward to games and events in the gym when she was a child, but that was 25 years ago. Today, children don’t have that luxury.

“There’s a lot of kids in this area,” said Isaac, 37. “But there’s nothing for them to do but walk the tracks and get into trouble.”

There are no other parks in the Burglund area, and the splash pad is only open May through September, leaving the local children nothing to do and nowhere to go during the other seven months.

“All children can be bad,” Wells said. “If they don’t have nothin’ to do, they’re gonna find something to get into. If they put the gym back over here, it would help.”

Current Ward 5 Selectwoman Andranette Jordan, in conjunction with Selectman-at-Large Tommy McKenzie and Ward 3 Selectwoman Tammy Witherspoon, held a small meeting Monday to find out what locals wanted to see happen with the property.

While many ideas were kicked about, including trying to reopen the community center and provide programs for the Burglund residents, no one has any plans to touch the gym with no funds budgeted for either renovation or demolition.

“We’ve looked at options but have not agreed on what path to take — to demolish it, renovate it or turn it into a pavilion,” Lockley said.

“Either fix it, or tear it down,” James Cotton, 92, said, an echo of hundreds of other residents when the topic comes up.

But, more often than not, residents choose to favor the renovation option.

“I wish they would renovate it and use it,” Wells said. “We’re taxpayers. They should take some of our tax money and do what we need done.”

Jordan and her Burglund neighbors hope to one day see the Martin Luther King Complex make a comeback and be a staple for the community, but for now, it sits, waiting for a day it may never see.